MASTER THE FIVE ELEMENTS AND WIN THE MAGE TOURNAMENT! 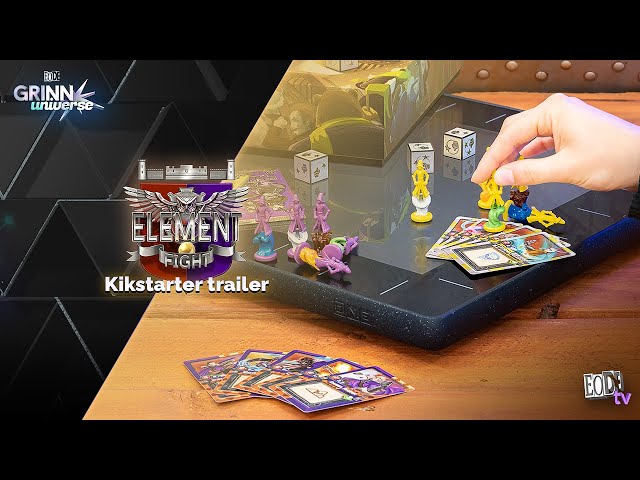 Welcome to the Grinn universe where magic is everything. Some inhabitants of this medieval fantasy world have a rare power: they are made up of particles of one of the 5 elements (fire, water, earth, wood, metal). The practice of magic was a traditional art on Grinn, erected as a religion. It became entertainment with fights in the arena.

Element fight is a sports game that sees 2 teams of 5 players compete against each other. The goal? Take possession of a ball and bring it to the opposing court to score.

Yes, but … no tackles here. This is not a football neither rugby match but an Element fight. The teams are made up of magicians who each master the strength of one of the 5 elements.

This game is a creation 100% worn by EODE for SquareOne® taking place in a steampunk universe. It is played with 2 players, each with a team of 5 magicians. They face each other in a duel filled with twists and turns using magic and trap cards to take the Golden Ball and score against the opposing camp.

The game board is made up of blocks of each of the 5 elements, offering the possibility of bonuses to players according to their characteristics.

Be smart, avoid your opponent, choose your path wisely… or fight each member of the opposing team using your unique power to kick them off the playing field.

Element Fight perfectly illustrates this unique combination of board game and video game that SquareOne offers. It is a board game, featuring cards and miniatures, enriched with live commentary by Ivan, the official presenter of the arena, and animated arcade-style sequences during the combat phases.

Studio for transmedia development and creative solutions. The team’s universes are mostly medieval-fantasy through video games, books and animation.